I have worked with Fujifilm’s X-T10 camera for the past year and a half, and loved it as its unobtrusive size and shape is exactly what I was looking for my street photography, while the choice of available Fujinon lenses provides the versatility to undertake other kinds of photography, namely portrait and urban/architecture. A couple of weeks ago I decided to upgrade to Fujifilm’s new X-T20 camera, mostly for three reasons: the greater resolution, the new black and white Acros film simulation and the touch-screen.

I haven’t had as much time as I would have liked to try the camera, but I did take it for a couple of test runs around Berlin and asked a few friends to pose. The new camera does not disappoint, on the contrary. Everything I loved about the X-T10 is still there, of course: the retro look and feel, the small size and weight, the handy dials, the colour rendering and the overall image quality, and the simplicity of the menu.

These are the major points which I noticed:

In summary, I’m quite happy to have made the upgrade and I can’t wait to take the camera for more test runs.

Find below a sample of the test results. 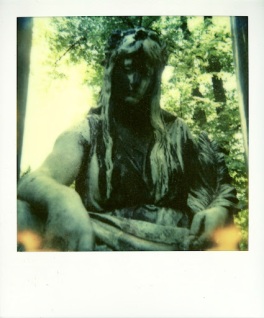 I recently took my two instant film cameras, the Fuji Instax 210 and a recently acquired Polaroid SX-70, to a couple of nearby graveyards. My main goal was to give the Polaroid its first serious try-out, but at the same time I wanted to find out how the two cameras compare.
It should be stated first that comparing the two cameras may be a case of apples and oranges. The cameras and the films work differently and use different chemical processes, achieving very different results. They are also targeted at very different groups of people. Fuji seems to market its instax cameras towards the snapshot-happy crowd, trying to place the cameras as a party gimmick for young people (mind you, I very much doubt that the clumsy 210 camera is lugged around much to parties); if you browse the instax flickr groups, people are using the Instax for all sorts of shots – from moody nature pics to fashion shootings. Impossible Project on the other hand caters to the more art-oriented crowd, a fact highlighted by the various exhibitions it organizes around the world. At the price that the new polaroid films sell, they are definitely not meant to be used for snapshots. Additionally, the imperfections inherent in the current film stock mean that its users are willing to embrace those.

Nonetheless, having the two cameras with me for shooting under the same conditions and in the same environment provided me with a good opportunity to weigh the pros and cons of the two cameras for a specific project.
For the SX-70, I consider the results as mixed. I like the otherworldly quality of the polaroids, which imbues the images with a dreamy, even ghostly mood that fits the subject matter extremely well, even giving the depicted statues a sense of timelessness. However, on some of the pics, the discoloration is a bit too intense even for me. I’m still learning to fine-tune the darkness settings on the camera, which may be part of the problem. Having shot some 20 photos, I consider about five to be good, and of those three to be better than good; although I should add that I really like those three.

The photos taken with the Fuji Instax are very different in quality and in mood – more realistic, sure, but still a bit off – softer than digital or normal film would be, and thus, again, less realistic than straight photography. I was also surprised to see how well the camera handled more muted colors in less than sunny settings, having previously shot mostly colorful scenes on sunny days. These muted colors give the resulting photos a very sombre feel, again very appropriate to the setting but totally opposite to the effect achieved by the Polaroid camera. On the down side, I am less than impressed with the shots where I used the flash – the flash is way too bright. Also, it doesn’t handle large contrasts very well – the light areas tend to come out all washed out. Overall, however, I got a larger number of satisfying photos from the Fuji, although, at the end, again only 3 or so which I find better than good.
[Click here to view more the photos]
Beyond the aesthetics, there are other factors to consider when comparing the camera. The price of the film for one, you can get 20 instax pics for the price of eight polaroids. The Instax also delivers results faster, you can at least recognize what you shot 30 seconds after taking the picture – with the Polaroid, it takes 4-5 minutes.

A couple of factors which weigh more heavily in favor of the Polaroid cameras is for one that Impossible Project offers a choice of films, including black & white, while Fuji just offers one. Then there is also the fact that there is a stronger community than there is for the Instax. The Polaroid flickr groups for example are a lot more active than those dedicated to the Instax, and Impossible Project itself is fueling the community through its web site (which offers plenty of advice as well) and through different exhibitions and contests (see also my earlier review of David Sylvian’s Glowing Enigmas exhibition).
Overall I guess it comes down to a matter of taste if you prefer the one to the other, or for what purpose you intend to use it. I for one am happy to have both and will be using both, but for different ends.
Links: