I spent a day in Paris last week, basically just passing through. It was a warm autumn day and people were enjoying it. Fashion was ever present, in fashion shoots or in fashionable people lounging about. I had a good time photographing people, some candidly, some with their consent.

I also visited the excellent and comprehensive exhibition with the works of Irving Penn at the Grand Palais. It features the most significant photos from his long and distinguished career, from the Vogue cover shots to the more intimate celebrity portraits of his later days, also showcasing the series he made on craftspeople and other regular folks around the world. Highly recommended.

I should start by saying that I’m not a big fan of Helmut Newton’s nudes – for me there is something unsettling about the sensationalist, voyeuristic way in which Newton stages his (all female) models. Having said that, I was happy to see the Helmut Newton Foundation here in Berlin host the works of Mario Testino, a friend of Helmut Newton’s, who approaches nude photography in a totally different manner – but more on that later; first a word on the exhibition itself.

The show is entitled Undressed, and its set-up has been created specifically for this site. The photos have been blown up larger than life and glued directly on the walls, almost covering every inch of wall space available. So basically one wanders through a maze of nude figures. The effect is mesmerising, and a game changer: you’re not peering (peeping?) at details in tiny to poster-sized images, instead the images and their content are right in your face. Quite a bold step for an installation of nudes which literally hide nothing.

Now back to Pestino’s work itself. The show is billed as examining the boundaries between fashion, eroticism and art. The fashion part itself is almost non-existant. Instead, the photos represent models (both famous and unknown) in both formal and informal settings. Some are staged (and look that way), while others (and for me the best) have a candid vibe about them. There is a playfulness about the images and the way that the models are presented which makes the nudity seem casual, almost irrelevant – in other words, lacking the voyeuristic aspect of Newton’s nudes. Testino also features models across the gender spectrum: female, male, and androgynous. While some images highlight the maleness or femaleness of the respective models, this is put into perspective by juxtaposition to those images which mix up and question the gender norms.

Undressed is on until November 2017. It is accompanied by a publication of the same name by the renowned Taschen publisher.

On a side note, the museum currently also features a temporary exhibition of Helmut Newton photos (apart from the permanent exhibition), entitled ‘Unseen’, most of which stem from portrait and fashion shootings which Newton undertook for various publications. This show I also enjoyed a lot.

While in Oslo I visited the “Mapplethorpe + Munch” exhibition being held in Oslo’s Munch Museum. The show juxtaposes photos by the American photographer Robert Mapplethorpe and artwork by Norwegian painter Edvard Munch.

When I read about the exhibition, I was skeptical if the concept would work. After all, Munch was an expressionist painter working with bright colours and lights, while Mapplethorpe worked in black and white, subtle lighting and formal arrangements, no matter the subject matter. Plus, a century separates the lives of the two artists, a century of shifting moral values and understanding of human sexuality.

So I was pleasantly surprised to find that, indeed, the concept worked very well. While at times Munch’s bright paintings did jar with Mapplethorpe’s somber photos, other art work by Munch (the drawings, printings and the woodcuts) did instead complement the photos. Thematically,  there were a lot more similarities than might be obvious. Both artists covered a range of the same topics: self portraiture, an exploration of the nude figure (both male and female), desire (more explicit in Mapplethorpe, but quite present in Munch as well). They both made a living by capturing portraits of famous people, and towards the end of their lives reflected on bodily decay and death.

END_OF_DOCUMENT_TOKEN_TO_BE_REPLACED 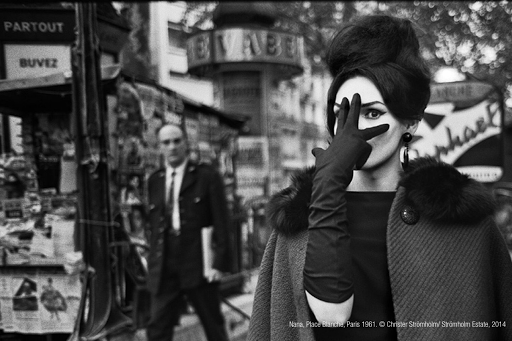 C/O Berlin is currently hosting a photo exhibition: Eyes Wide Open – 100 years of Leica photography. This extensive, and impressive, show which features hundreds of photographs, traces the trajectory of the small, handy camera through the various aspects encompassed by modern photography. Used first as a tool by people to document life around then, the Leica camera was quickly adopted by photojournalist, and served to pretty much document the better part of the 20th century in the Western world, including most of the 20th century conflicts from the Spanish civil war onwards. From journalism, the application of the Leica branched out, onto street, fashion and fine art.
The photos on display include a great many of the last century’s iconic, classic images – from Cartier-Bresson’s man jumping over a puddle, to the Vietnamese girl running from Napalm by Nick Út, the sailor kissing a woman in Times Square by Alfred Eisenstaedt, and the classic James Dean portrait captured by Dennis Stock. Different national tendencies are also analyzed, as the show dedicates different sections to respectively German, French, US, Spanish and Japanese post-WW2 photography.
The bulk of the images on display are in black and white, and personally I found that the chosen colour images resound even stronger for that. The fact that the 21st century plays only a minor role in the collected body of work obviously documents Leica’s diminishing role in this day and age, whatever the reasons may be.
The exhibition is rounded off with information about the Leica and the people and facilities behind the discovery and the production of the camera. The accompanying hard-cover catalogue is massive and clocks in at nearly 600 pages (and almost 100€).Thus, all in all, a very worthwhile exhibition to visit. It is on until 1 November 2015. Various lectures on different aspects of Leica photography as well as guided tours with the curator are also offered.
For more information, see here:
Eyes Wide Open – 100 years of Leica photography at C/O Berlin

I recently participated in two projects that involved self portraits.
The first one was for a polaroid project entitled “Instant People” – see details here. The photos for that project are currently shown at the Documenta art show in Kassel, with more shows planned in Poland, Korea and Luxembourg. The attached photo shows the hanging in Kassel.

The second project is an online project started by Dutch magazine EAGER. Called “The Red Line”, the goal is to get a series of 2012 self portraits until the end of the year, whereby each photo is linked to the next via a red line that crosses each picture. The project is still a long way short of 2012 pics, but then, the year is still young. Click here to view the photos.